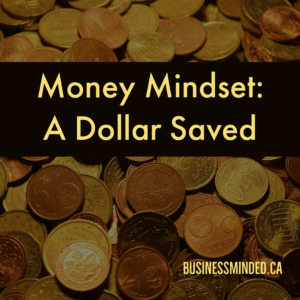 Is a dollar earned.

How many times have we heard the sage advice; “A dollar saved is a dollar earned.” This cliche money tip is the cornerstone for frugal spenders, and as a popular belief, has its’ own space in the Money Mindset section. As a result of this phrases popularity, we would be remiss if we did not take this opportunity to dissect this ingrained philosophy.

What does A Dollar Saved is a Dollar Earned mean?

The idea behind this philosophy is that income is fixed in the short term, and so to have more leftover, you need to cut back on where you spend. Holding the fixed income assumption constant, this is sound advice. The issue arises when taking this philosophy too far.

What are the benefits of this Money Mindset?

The benefits of living frugally can be best seen in the judicious cuts in your expenses. Asking yourself whether the purchase is necessary can be a very good way to curb erroneous spending. The benefits are especially prevalent if you are carrying credit card debt, or on the borderline of living paycheck to paycheck. Regardless of income, spending all that you make causes difficulties, especially when the unexpected occurs. A healthy dose of spending skepticism provides the necessary focus to trim the fat on your purchasing habits.

Another benefit of this Money Mindset, especially for those who are not independently wealthy (yet). Frugality is often seen as an accomplishment, and provides a sense of satisfaction. We’ve all heard those conversations, likely even allowed ourselves a humble brag when talking about a deal we just received at the outlet malls. Saving money is a good feeling, which allows us to conclude; a dollar saved is a dollar earned has some merit in the personal finance realm.

What are the risks of this Money Mindset?

A dollar saved is a dollar earned. This focus on frugality, while at times has its own merits, can be taken too far. If money worries aren’t constricting you, it is probable that you need some discretionary spending to help you live life to its fullest. There should be an allowance in everyone’s spending patterns that allow you to safely spend on luxury purchases. The limits to the Money Mindset: A dollar saved is a dollar earned are hence put to the test. Luxury purchases are, applying this philosophy literally, causing feelings of guilt for the “loss” of money.

The other risk of this Money Mindset is when we take the bargain chasing too far. Often times the sticker price is taken as the final cost, and we neglect to consider the extra time and energy that went into securing that bargain. Spending time browsing online shopping sites, flipping through paper flyers searching for a lower price, has an opportunity cost on that time, on those efforts.

Where do we draw the line between a good deal and a waste of time and energy?

As we try, in Business Minded fashion to apply a formula to these topics of finance and success, we may consider the following equation to find the break even:

As long as we receive more joy than the efforts that the bargain took, i.e. bargain hunting. The efforts we put out, and the cost associated with our time and energy, were worth it. Taking this philosophy too far might be seen when we spend an hour finding a deal that saves us 10 cents. Assuming our hour is worth more than 10 cents, we have lost if we spend those efforts.

The Verdict: A good tool in the toolkit.

A dollar saved is a dollar earned. This philosophy, or money mindset, really holds its merit when money is in short supply. While not an enjoyable way to live, when short term sacrifices are required to make ends meet, this philosophy can help clarify spending needs. In the long term, income is variable as a direct result of increased value. Spending on improving our skills and abilities will help move income up.

Once we have some financial control, this money mindset is useful for periodically evaluating our spending. As our value increases, the size of the discounts we get excited over also needs to increase to keep this money mindset favorable. As you achieve greater financial wealth, remember the equation for A dollar saved is a dollar earned:

With this tool in your tool chest, financial freedom is ever-more attainable. With your finances in check, continue your quest for success.