You know, taxes are unavoidable. And if you have to encounter those taxes (free tip: you can't escape taxes), you might as well understand what the implications are for your financial well-being.

Income taxes are one of the most common taxes we all encounter. And unfortunately, there are some serious misconceptions about how taxes are levied against us. This is brought about by the marginal tax rate system, as well as some payroll practices that feed our misconceptions. Let's take them in turn.

Much of the world uses marginal tax rates, and while the percentages may vary from country to country, and even province to province (state to state), the system is the same. Governments provide us a tax break for a certain income amount, and slowly increase rates the more we make. The increases in tax rates fall into "tax brackets". The marginal element means that the tax rates only affect income in that tax bracket. To understand how this works, let's look at the 2019 Canadian Federal tax rates. (Note: if you are reading this from another country, the process is the same but the percentages are likely different.) 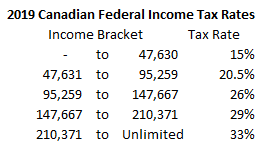 In this example, we work through the tiers and end up with a total amount of tax paid to the Federal government of $ 18,140.90. There is a common misconception that earning more money means the government takes a higher percentage of every dollar. In the above example, the misconception is that making $ 100,000 the combined tax rate is 26%, meaning $ 26,000 in tax paid. The difference from this misconception is an extra $ 7,859.10!

Taxation Myth: The more I make, the more taxes the government takes on all my money.

We can see that this taxation myth is dispelled! But we need to pass the word out. I have heard people working for hourly pay actually giving up shifts to not reach the next income bracket, thinking they are saving money in taxes! Let me simply sum up the math by saying, earning more money is never worse for you financially.

But these myths did start somewhere, so let's look at why that is!

Income Tax is usually automatically calculated each pay period by payroll software. The software makes an important assumption: that current earnings are the level of earnings you will earn all year long. Now let's say you receive a mid-year raise on July 1st, with your salary increasing from 70,000 to 85,000. Your income for the year will be $ 77,500. Unfortunately, the payroll system will be taxing the last half the year as if you are making $ 85,000 in annual income. This means for 6 months you will be paying too much in income tax.

This same situation can have an even more skewed result for certain types of compensation as well. This can be seen in bonuses, commissions, and overtime. These additional one-time compensation line items can inflate your earnings for the current pay period substantially, which puts you into a much higher marginal tax bracket for that pay. Explained another way, most payroll software calculates your one-time earnings as being received each pay. If you earned an extra 25% in overtime this pay, your income tax paid will be as if you make an extra 25% each pay (wouldn't that be nice?).

The good news is, this will be refunded as soon as you file your taxes the following year. Unfortunately, the fluctuating tax payments and clear as mud explanations lead many people to jump to the wrong conclusion about how income tax works.

Income Taxes are levied against all of us as we earn income. These taxes are based on a tiered system, called marginal tax rate system, where any income in that given tier is taxed at the same rate. If you go up an income tier, the tax rates levied against those additional dollars earned changes, but only against the extra dollars above the tier minimum! Pro tip: Knowing these tiers is vital for planning your investments!

When calculating income taxes, most payroll software calculations annualize the earnings from the current period. That means if you make more money on one pay cheque, you will pay tax as if you make that amount each pay cheque. These extra taxes paid will be refunded to you when you file your taxes the following year. Earning more income will never be worse for you financially.

Note: Personal tax credits also have an impact on the amount of Income Taxes you owe. For simplicity, tax credits have been left out of this discussion, as not everyone is applicable for the same tax credits.